Empowerment Risk and Reinvention Self care Posted on Oct 18, 2019 by Susan Sparks 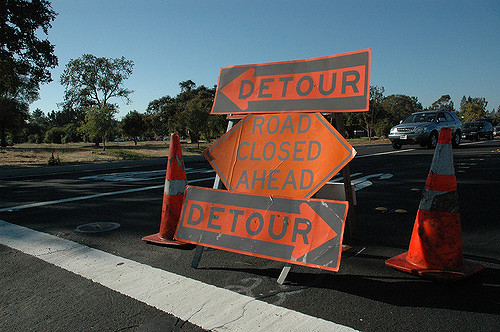 This piece was also featured as a nationally syndicated column with GateHouse Media.

I have decided that New York City is the best place to live if you want to take the long way around. Last week, I had to take four detours in order to get home. The first was on Park Avenue, where police were sending everyone north because of construction. We turned again because of a parade, and then we took another detour due to a street fair. Finally, traffic came to a stop when a man chose to rant about the issues of the day in the middle of Third Avenue.

And so it goes in our fair city. You’re trying to go one way, but thanks to construction, a parade, or a man ranting in the middle of Third Avenue, you have to take the long way around.

We’ve all been there, perhaps in more ways than one.

Perhaps you’re in a relationship that seems to be taking the long way around.

Maybe your career path is unfolding with unwelcome twists and turns.

Or perhaps injury has forced a delay in your life.

It’s frustrating when these things happen. But as frustrating as it is, taking the long way may be the best thing that can happen to us.

Thousands of years ago, God led the Israelites the long way around: “When Pharaoh let the people go, God did not lead them by way of the land of the Philistines, although that was nearer” (Exodus 13:17). But God had a reason: “For God said, ‘If the people face war, they may change their minds and return to Egypt.’ So God led the people by the roundabout way of the wilderness toward the Red Sea” (Exodus 13:17-18).

God knew the Israelites—their fears, their hopes, and their capabilities—and designated a route based on what they could do. It may not have been the fastest route. In fact, it was a roundabout way through the wilderness. But it was a route that took them away from dangers and threats that would have thrown them off their quest. Long as it was, it was still a path that would get them to the promised land.

What if you found your dream job but hadn’t fully developed the right skill set? What if you discovered the perfect relationship, yet lacked the emotional bandwidth to nurture it? What if a great opportunity presented itself when you didn’t have the depth or grounding to step into it?

Sometimes we need time to mature into our best selves before we start down the fast track.

We can see the same principle at work in nature. For example, consider the growth cycle of Chinese bamboo. It grows only about two inches a year for the first four years. Then, if nurtured correctly, it grows up to eighty feet in the fifth year. It takes time in those beginning years to generate a sufficient root system to support the exponential growth at the end.

It’s hard when we feel we are not on the fast track. We worry about being delayed. We fret over arriving late. But late on whose schedule?

Our timetable is not the one that matters. What matters is the timeline God has placed in front of each of us. We can choose to fight it. Or we can trust the process, knowing that long way or not, God will eventually lead us home.