POOPING IN THE BIRD FEEDER: An Earth Day Message 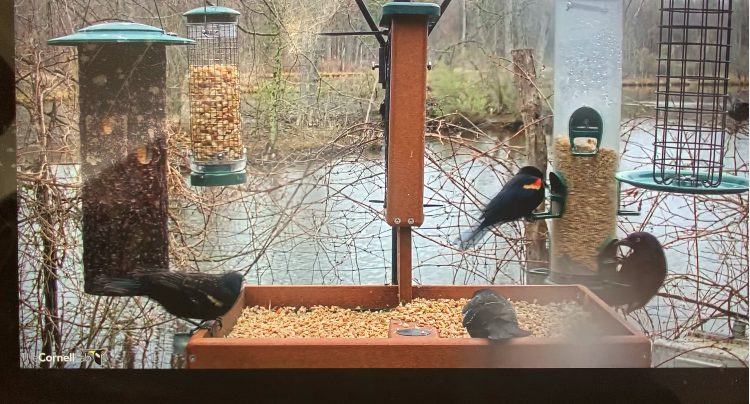 (Also given as a sermon at Madison Avenue Baptist Church and published by the Christian Century under the title “This Earth Day, remembering the fragile balance between us and our home.”)

I love watching bird feeder webcams on YouTube. Okay, yes, it is a geeky thing to do. However, my husband Toby and I don’t have a view of trees, grass, or birds out of our New York City apartment window, so we enjoy virtual bird feeders.

Recently, as we watched all the happy little birds flit in and out of a feeder, enjoying the tasty seeds, a giant greedy blue jay suddenly swooped in, bullied all the other birds out of the feeder, ate an inordinate number of seeds, then turned his back, pooped in the bird feeder, and flew away.

Pooped in the bird feeder.

Contaminate their food source? Spoil their life support system? Who would do such a thing?

Our bird feeder is planet Earth. It is our food source. It is our life support system. And yet, we’ve been polluting and contaminating it for centuries. Brothers and sisters, I hate to say it, but we’ve been pooping in our own bird feeder.

Why would we do that? For a long time, we have used the Bible as an excuse. In Genesis, God says, “Let them [human beings] have dominion over the fish of the sea, and over the birds of the air, and over the cattle, and over all the wild animals of the earth, and over every creeping thing that creeps upon the earth.” Notwithstanding the fact that the Hebrew word for “dominion” (radah) translates as caregiving, even nurturing, many of us have interpreted the word “dominion” as a license for exploitation.

The Bible says let them have dominion over the fish of the sea. So, we have hunted the blue whale until it is almost extinct.

The Bible says let them have dominion over the birds of the air. So, we have sprayed DDT, which has thinned the eggshells of bald eagles and decimated the species.

The Bible says let them have dominion over the wild animals of the earth. So, we have killed baby seals for pelts.

And the Bible says let them have dominion over the creeping things of the earth, so we have created snake-skin cowboy boots (which between you and me, I’m fine with).

But in general, we have treated the earth like a cheap rental property. And why not? We own it. And, as most Americans believe, there is always another option.

There’s always more wilderness; we’ll always have more wild spaces. Yet, the reality is that plastic waste and toxic chemicals have been found even in the remote parts of the Antarctic.

There are always the oceans. Yet, scientists studying the deepest parts of the ocean have found traces of PCBs in lifeforms there.

No problem, we still have space! Yet, according to NASA, there are already 500,000 pieces of space debris floating around the earth.

There are no other options. Not in land, sea, or sky. There is nowhere else to go.

To use another poop metaphor, when the chips are down, the buffalo is empty.

Remember Jesus’ parable about the talents? A landowner leaves three workers with talents (money). The first two invest it and make more, but the third buries it and gives it back in its same amount. Remember how mad the landowner gets because the guy just buries it and doesn’t grow it into more? Can you imagine how angry God must be watching us not just bury creation, but destroy it?

In our defense, we’ve made some progress. I mean, most of us don’t throw our McDonald’s bags out of our car windows. But we are still woefully ignorant of the extent of our daily damage to the planet.

Here’s an embarrassing example. Toby and I decided to buy a fake Christmas tree this year. Save the trees, right? The problem was that the house didn’t have that fabulous Christmas tree smell. So, I bought balsam-scented AEROSOL spray. We often don’t stop to think about the carbon footprints we are leaving with almost everything we do.

Another example that we wouldn’t otherwise think of as a polluter: Crypto currency. Due to the massive energy demands from all the global data centers and the digital mining, the amount of electricity bitcoin miners consume in one year is more than the amount of energy used to power the entire country of Argentina.

We’re pooping in our bird feeder, and the worst thing is that many times, we don’t even realize it.

Xiye Bastida, a contributor to All We Can Save, an anthology of essays by female climate leaders, writes: “A vibrant fair and regenerative future is possible, not when thousands of people do climate justice activism perfectly, but when millions of people do the best they can.” In short, just do one green thing a day. Pick up one piece of trash, turn off the lights when you leave a room, or cut your shower by a few minutes. It’s in those micro-steps that we begin the critical work of change—a change that is needed in all aspects of life.

In the end, our disregard for taking care of Earth is, I’m afraid, a sign of a much larger and more sinister problem. It represents our failure to recognize the holy connection we have not only to the planet, but to each other. The Native American Chief Seattle put it this way: “All things are connected like the blood that unites us all.”

This week is an excruciating reminder of the breach of that connection. We mark Earth Day while surrounded by the reality of our utter disregard, disrespect, and violence toward creation—a holy gift from God. As we acknowledge that break of the holy connection to creation, we also bear witness to the disregard, disrespect, and violence done to another holy gift from God—each other. Eyes on Minneapolis, the world awaits the verdict in Derek Chauvin’s trial for the murder of George Floyd. In the midst of that trial, we watched with horror as another black man was murdered in Minneapolis with a gun “mistaken” for a taser. To date in 2021, over sixty people have lost their lives in US mass murders. Immigrant children are imprisoned at our borders, and rampant violence is being waged on our Asian American brothers and sisters.

Holocaust survivor Victor Frankl wrote, “Between stimulus and response there is a space. In that space is our power to choose our response. In our response lies our growth and our freedom.”

We are in that space right now, facing a choice of how we will live both with each other and on this planet. We can bully all of the other birds out of the feeder with greed and malice, take the seeds of justice and hope for ourselves, pollute the resources that were meant for everyone, and go down together. Or we can remember who and whose we are. We can remember the fragile balance between us and our home. We can remember that we are stewards of our planet and stewards of each other’s well-being. And we can survive.

It is in that collective effort to survive—and only in that option—that the ending words of our scripture from Genesis will truly come to fruition:

“And God saw all that had been made, and God saw that it was good.”