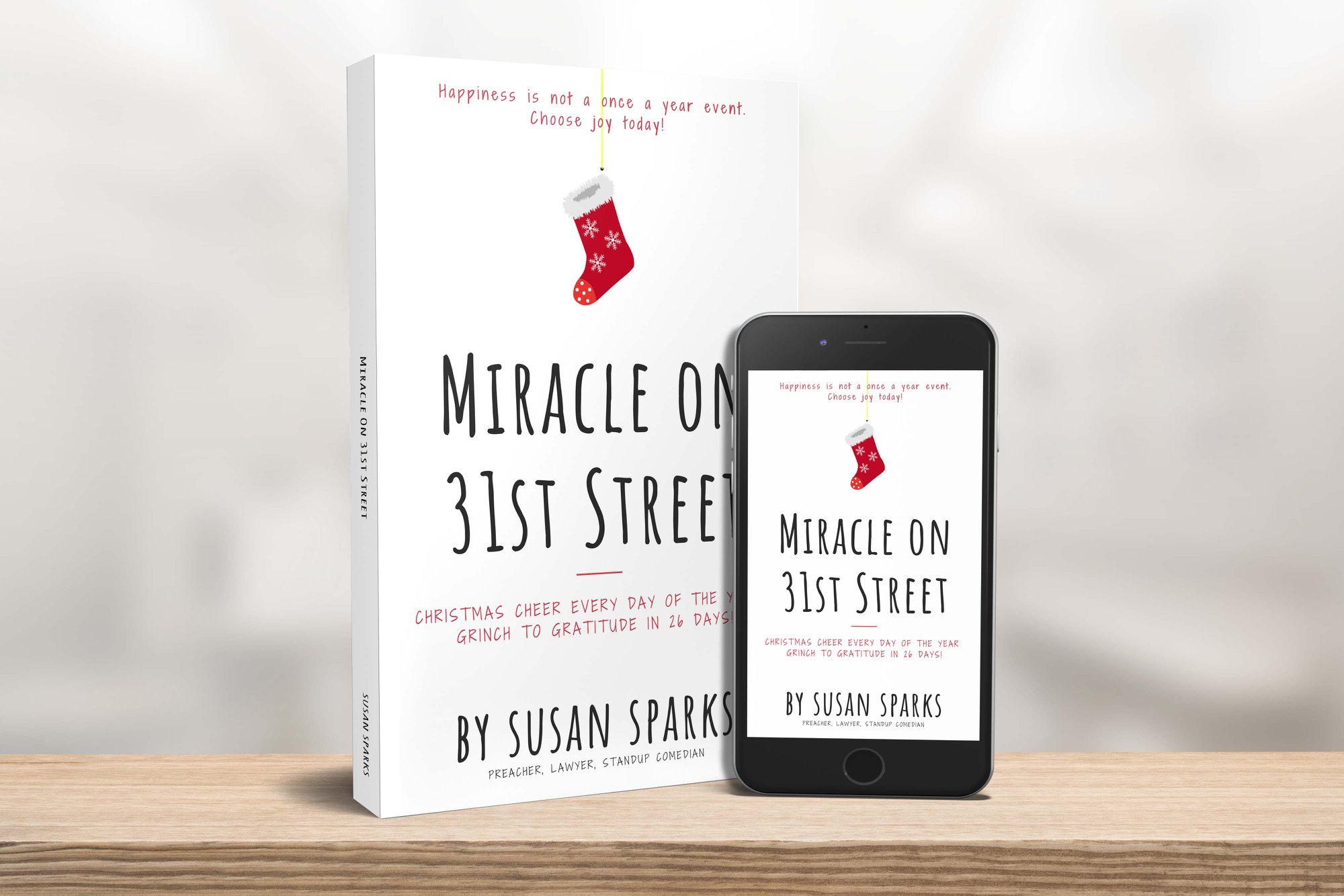 This piece is a sample chapter from my new book:

Miracle on 31st Street: Christmas Cheer Every Day of the Year – Grinch to Gratitude in 26 Days!

To add a little punch to this meditation, grab a keychain or anything else that will make a rattling noise. Drop it on a hard surface for a sound effect every time you encounter the word “CHAINS.”

One of my favorite Christmas movies is Scrooge. Not the newer versions. I love the one with the great British actor Albert Finney as Scrooge and Alec Guinness (Ben Kenobi in TheEmpire Strikes Back) as Marley, Scrooge’s late business partner. As you probably remember, the movie is based on A Christmas Carolby Charles Dickens.

The story begins with Marley’s ghost returning to warn Scrooge about the dangers of ignoring Christmas, forgetting charity and joy, and wrapping ourselves up in want and worry.

His ghost stands in Scrooge’s bedroom, rattling his chains and wailing, “I wear the chain I forged in life. I made it link by link. Yard by yard. I girded it of my own free will, and by my own free will I wore it.”

After Marley visits Scrooge, three additional ghosts (past, present, and future) appear to take Scrooge on a painfully raw inventory of his life, his choices, and his changes—all in an effort to warn him off his destructive path before it is too late.

The first ghost, the Ghost of Christmas Past, shows Scrooge how he began to forget Christmas early on in his life. He chose work and money over love, family, and happiness. “Humbug!” he would say to these things. “Bah, humbug.”

The second ghost shows him that as the years went by, those choices changed him. Scrooge watches how he became withdrawn, sullen, selfish, and judgmental. Over time, he turned into a person who resented the happiness of those around him. He became a person who couldn’t feel joy.

Then the scariest of all—the Ghost of Christmas Yet to Come—arrives to show him that those changes will have consequences. For example, in this future world, Tiny Tim dies because Scrooge doesn’t pay his dad enough to get medical care. But the suffering isn’t only about others. The last thing the ghost shows him is a graveyard, where a cheap tombstone on an isolated, unkept grave bears his name.

We see Scrooge’s life as a chain reaction of choices, changes, and consequences, and in the end, Scrooge’s chain is far longer than Marley’s.

I’d like to say that we can leave that scary moment at the movie theater, but in fact, we forge the same chains in life. We all make choices, some good and some bad, and that’s fine. But when we continually repeat the bad choices, that’s when we forge the first link. And over time, that link becomes two links, then three, then ten, then fifty. And before you know it, you’re dragging one heavy weight.

It’s then that your mood and personality start to change. People around you begin to be affected. And to all things good and true, you say “Humbug!” As the great essayist and philosopher Ralph Waldo Emerson said, “[I]t behooves us to be careful what we worship, for what we are worshipping, we are becoming.”

These are sobering questions, but here’s the good news. The story doesn’t end at the cheap tombstone on an isolated, unkept grave. There is still a chance to heal the humbug.

Ultimately, Scrooge awakes with his arms wrapped around his bedpost and realizes that he has gotten his wish. He has gotten a second chance! And from that moment on, he lives differently, sees the world differently, treats other and himself differently.

The moral of the story? It’s never—ever—too late to change. I don’t care how old you are, how entrenched you’ve become, or how many chains you have forged. It’s never too late to alter a decision, change your mind, make amends, take a new path, pursue a long-lost dream, or find love again. Re-evaluating our choices and priorities is like adjusting the rudder of a great ship. The slightest movement can change its entire course.

Sometime today, set aside a few moments to take the Marley test. Look at your past choices, your present priorities, and the future consequences of both.

If you don’t like what you’re seeing, then remember it’s not the end of the story.

All we have to do is heal the humbug.