Empowerment Hope Self care Posted on Aug 5, 2022 by Susan Sparks

Find a Center That Will Hold 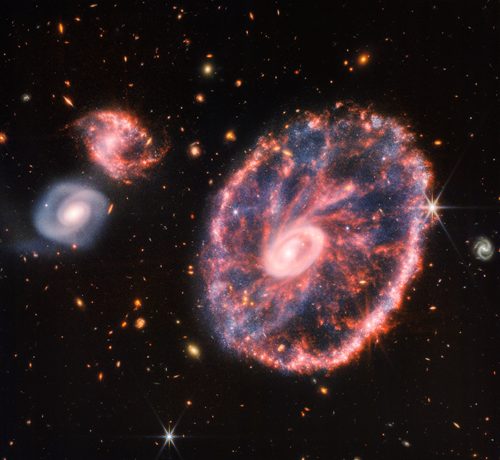 How do you heal?

Me? Among many things, I find healing in the stars. And specifically, the spectacular images from the James Webb telescope like the “Cartwheel Galaxy” (above) published just this week. Those images bring me perspective — a sense of belonging to something bigger than our stressful, angst-filled world.

The stars are our old ones, our wise ones, for we as human beings carry their genetic imprint. Joni Mitchell sang the famous lyrics “we are stardust,” and as it turns out, she’s right.

Our human bodies are made of remnants of stars and massive explosions in the galaxies. Carbon, nitrogen, oxygen, iron, and sulfur—most of the materials that we’re made of—come out of the star dust kicked off by those explosions and scattered across the universe. As Astrophysicist Karel Schrijver explained in National Geographic, “We have stuff in us as old as the universe.”

We have much to learn from the heavens. In fact, the stars actually share the secret to life. (Brace yourself—a liberal arts major is about to explain physics . . .)

There are basically two stages to the life of a star. The first stage is when a star is born. As gravity begins to pull gases towards a center core, the temperature begins to rise, and eventually, the density of the gases causes a nuclear reaction. It’s then that the star begins to shine, drawing energy toward the light, to its core, then radiating that light back out into the galaxy.

This can go on for billions of years until we come to the second stage, when the star’s center can no longer hold. Because the star has too little fuel left to maintain its core temperature, its light goes out and it collapses under its own weight, drawing everything around it into a dark abyss.

Tell me that doesn’t sound familiar. Sometimes we draw our energy toward the light and reflect its warmth to all around us. Other times, we have lost all fuel; our light goes out and we collapse, emotionally or otherwise, into a dark abyss.

These days, it’s easy to find ourselves in that abyss. And like the stars, the only thing between a heart that draws in the light and a heart that collapses into a black hole is a strong center that can hold.

Sadly, we tend to put all kinds of crazy things at our center that weaken our core, such as ego, anger, status, stuff, and other people. Inevitably, there comes a time when these things can’t hold anymore. The latch on your designer purse will eventually break. Human beings let us down. Botox lasts for only three months (or so I’ve heard). Like a dying star, we begin to collapse into the darkness, and our light goes out.

Which brings us to the secret of life—we must find a center that will hold.

We need look no further than the scriptures to locate that strong center. Consider Isaiah 40:31:“But they that wait upon the Lord shall renew their strength; they shall mount up with wings as eagles.”

What do you have at the center of your life?

Is it strong enough to hold you through the good times and the bad?

If your light is starting to go out, get a little starstruck. Find a place where you can look up into the heavens. Or just Google “Webb telescope” and enjoy the images of those incredible galaxies. Then, remember the creator of those stars — the ultimate center that can hold. It is through that true center that you, too, can hold strong in the hardest times, radiating light and warmth to all creation.