A World Without Kudzu 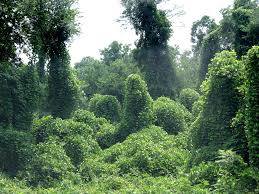 This piece was also featured as a nationally syndicated column with GateHouse Media and preached as a sermon at the historic Madison Avenue Baptist Church.

As a North Carolinian living in New York, I miss so many things: good barbeque (or maybe I should say “legitimate barbecue”), and Southern accents, such as people who put the accent on the first syllable of words like “HALL-o-ween, and “THANKS-giving.”

But there is one thing I do not miss from the South: kudzu. Nicknamed “the vine that ate the South,” kudzu is an invasive green parasite that grows up to a foot per day and has now blanketed more than 7 million acres in North America (mostly in the Southeast).

To keep kudzu at bay, you have to be vigilant in tending your yard. The second you give it permission, that vine creeps in and begins its destructive work. First it wraps around the heart of the plant or tree and strangles its access to nutrients. Then it suffocates the tree or shrub by blocking out sunlight and air. Finally, the sheer weight of it can cause plants and even trees to just snap.

Oh, for a world without kudzu! How much more beautiful the place would be without it.

The same can be said of a similar blight that, like kudzu, has a stranglehold on our country. It’s the blight of hatred, racism, and anti-Semitism — an evil parasite that has eaten up our land.

We all watched or read in horror Thursday morning as a gunman killed 12 people in Thousand Oaks, California, and recently as two African-Americans grandparents were gunned down in cold blood in Kentucky, 11 congregants were slaughtered while praying in a Pittsburgh synagogue, and 12 pipe bombs were mailed to various American leaders across the country.

Evil has been given permission in this land.

We have not been vigilant in keeping an eye on this blight. Like kudzu, evil just waits until goodness and decency have turned their backs for a split second. Then it starts to suffocate all things good, strangling off all sense of justice, then growing to the point that the sheer weight of it can snap us in two.

I think we’d better do a little gardening.

The first and best way to fight kudzu is to keep your land clear of it in the first place. Once kudzu gets a strong hold, it is much harder to fight. So, too, the best way to fight evil is to prevent it from growing in the first place. And the best place to do that is with the young. Children are not born with the blight of evil. They learn it, sometimes at a tragically early age.

As the lyrics to a wonderful song from the musical South Pacific remind us:

Think about children on the playground. They don’t see things like color or religion … until they are carefully taught. We must be vigilant in keeping the garden in which our children grow full of love and light and free of the vine of evil.

A second way to fight kudzu is to fence it off. We must do the same with evil by joining together, arm in arm, in solidarity against its devastation. Consider the example of the members of the mosque in Pittsburgh who locked arms with their Jewish brothers and sisters, raising over $200,000 for the synagogue. They reached across differences to fence off evil.

But even with our most vigilant work, there comes the day when kudzu makes it over the fence and arrives at our door. At that point, we have no choice but to pull that evil up by its roots. We must separate it from its power.

An example of this was recently seen in a small village in Germany. The town’s residents had grown sick and tired of the neo-Nazis marching in their square, so for every meter the group marched, the town donated 10 euros to an organization that helped people leave right-wing extremist groups. Residents threw confetti at the end of the parade to celebrate the fact that the neo-Nazis had just raised 12,000 euros against their own cause.

What if we fought to keep evil from creeping into our hearts, our homes, our towns, and our nations? What kind of world might we then have then?