WINTER IS COMING: A Study of Holy Week and Game of Thrones 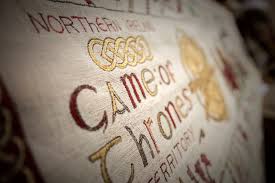 This column was preached as the Palm Sunday sermon at the historic Madison Avenue Baptist Church in NYC as well as featured by Baptist News Global.

It’s finally here! The last season of Game of Thrones! And when did the first episode debut? Palm Sunday. The parallel seems too obvious to ignore.

For those of you who aren’t wrapped up in this addictive show, it’s a medieval fantasy epic about kings, queens, knights, and renegades, all of whom are playing a deadly game for control of the Seven Kingdoms of Westeros. One of the great houses of Westeros, the House of Stark, sits far in the north where the onset of winter can be fast and perilous. Their motto, one of warning and vigilance, is comprised of three words: Winter is Coming.

How ironic that the final season debuted on the same day as Palm Sunday, when we remember how people welcomed Jesus and hailed him as the Messiah, though all the while, winter was coming. And oh, how fast people can turn when the cold sets in.

The story of this treachery during Holy Week shares an important lesson about hospitality and welcome. It invites us to ask what true Christian hospitality is all about.

Sadly, if you Google “church hospitality,” you get articles about, yes, coffee hour.

I mean, don’t get me wrong. I love a good coffee hour, but I think Jesus had something bigger than coffee hour in mind for hospitality and the church.

What do we do then? Do we stand in solidarity with our brothers and sisters, or do we step back into the shadows in silence as the crowd yells, “Crucify him! Crucify him!” Thatis the true test of hospitality.

Many people hear that question and answer, “Of course I stand in solidarity with people. I would never stand in the shadows in silence—or worse, yell ‘crucify them!’”

In truth, I am afraid we do it every day.

Think about it on an individual level. We can be the best of friends, partners, spouses, or parents at coffee hour on the sunny Palm Sundays, but what about when winter sets in and the trials of life start? What happens when the divorce hits, when the addiction crisis surfaces, when the cancer diagnosis is made, when a job is lost? Can we still wave the palm of hospitality and stand in solidarity in times of trial like these?

Or consider it from a national perspective. Oh, we’re right there in the beginning waving the palm leaves. In fact, we have a huge statue in New York Harbor that waves a proverbial palm leaf:

Give me your tired, your poor,
Your huddled masses yearning to breathe free.

But winter is coming. When the trials of life start, do we really show hospitality as a nation? Or do we allow the cold to harden our hearts? The answer is pretty clear. Just look at the statistics.

This year a report by the United Nations showed that 40 million peoplelive below the poverty line in the United States. This is in the richest nation in the world. How about equal access to health care? 3.9 million childrenin this country have no health care. Or what about showing hospitality to the over 15,000 immigrant children being heldin detention centers across the country? We quickly turn from waving palm leaves in New York Harbor to yelling, “Crucify them! Crucify them!”

One of the most painfully clear examples of this is a common response to racism in America. Last week, Kyle Korver, a white NBA basketball player, published a powerful articleabout coming to terms with white privilege. He reflected on all the times that players of color had been harassed by fans in his presence, treated unfairly, even injured by the police, all the while he stood by, in the shadows, saying nothing. He called it “blending in and opting out.”

Over the years, after watching teammate after teammate stare down the raw, ugly face of racism, he began to realize his personal responsibility in their pain. He explained, “[T]he more dangerous form of racism isn’t that loud and stupid kind . . . It’s the quiet and subtle kind. The kind that almost hides itself in plain view. It’s the person who does and says all the ‘right’ things in public: They’re perfectly friendly when they meet a person of color. They’re very polite. But in private? Well … they sort of wish that everyone would stop making everything ‘about race’ all the time.”

Ultimately, he recognized his responsibility, saying, “I know that, as a white man, I have to hold my fellow white men accountable. We have to hold each other accountable. And we all have to be accountable—period. Not just for our own actions, but also for the ways that our inaction can create a ‘safe’ space for toxic behavior.”

Will we allow the cold to harden our hearts so that we simply blend in and opt out? Or will we recognize our responsibility and stand in solidarity? As the book of Romans commands, “Share with the Lord’s people who are in need. Practice hospitality.”(Romans 12:13)

This week think about the palms waved for Jesus when everything was sunny and celebratory. Then think of the courage it will take, later in the week, to stand with Jesus and wave that palm in front of Pilate.

That trial—Jesus’ trial—is the same one that so many face every day of their lives. And when those trials of poverty, hunger, racism, homophobia, and religious hatred start, where are we? Are we standing in solidarity? Or have we opted out, preferring to hide in the shadows, yelling, “Crucify him! Crucify him!”

Brothers and sisters, winter is coming.

Where will you stand when the cold sets in?