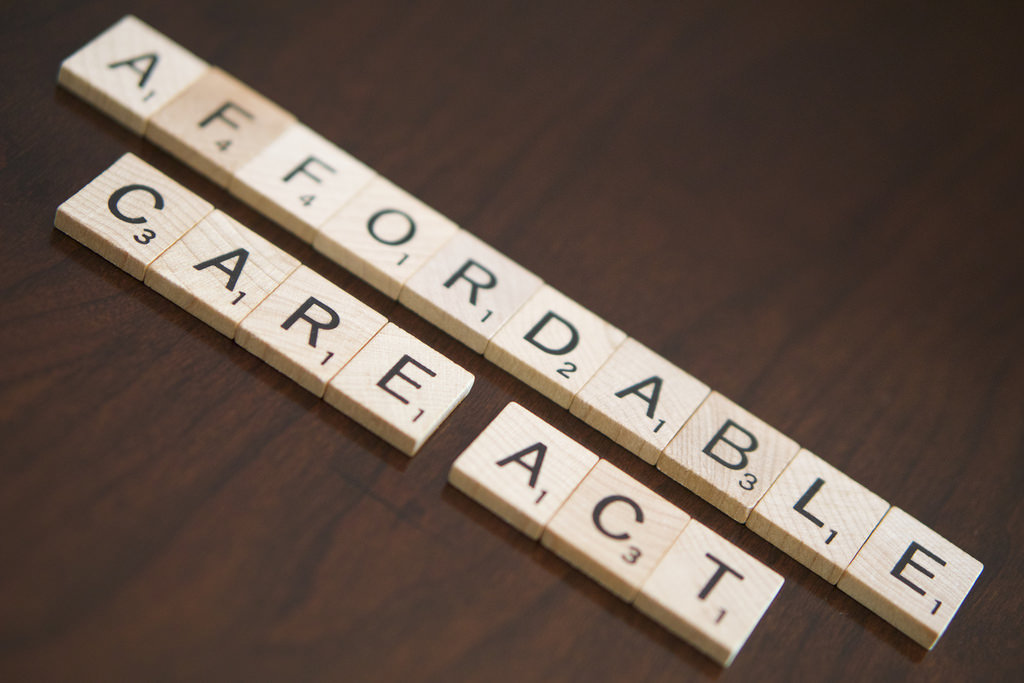 This blog was also preached as a sermon and featured by the Huffington Post.

The great Protestant theologian Karl Barth believed that we should read with the Bible in one hand and the newspaper in the other. So let’s try it.

Here’s a recent headline from the New York Times: “High Risk Strategy Proposed for Repeal of the Affordable Care Act.”

And now here’s something from the Bible: As Jesus and his disciples and a large crowd were leaving Jericho, Bartimaeus son of Timaeus, a blind beggar, was sitting by the roadside. When he heard that it was Jesus of Nazareth, he began to shout out and say, “Jesus, Son of David, have mercy on me!” Many sternly ordered him to be quiet, but he cried out even more loudly, “Son of David, have mercy on me!” Jesus stood still and said, “Call him here.” And they called the blind man, saying to him, “Take heart; get up, he is calling you.” So throwing off his cloak, he sprang up and came to Jesus. Then Jesus said to him, “What do you want me to do for you?” The blind man said to him, “My teacher, let me see again.” Jesus said to him, “Go, your faith has made you well.” (Mark 10:46-52)

If you take Barth’s advice and read this scripture in combination with the New York Times, you get this modern version:

As Jesus and his disciples were leaving Jericho, Bartimaeus, a blind beggar, was sitting by the roadside. When he heard that it was Jesus of Nazareth, he began to shout out and say, “Jesus, Son of David, have mercy on me!”

Several of the disciples went over and said, “Be quiet and wait your turn. Can’t you see there’s a crowd waiting to see the Messiah?”

As Bartimaeus paused in silence, he felt a clipboard being thrust into his hands.

“Now,” said John, “fill out the following thirteen forms. We need name, address, social security number, next of kin, and whether you have an HMO, PPO, or POS. Please indicate whether you have additional vision and/or dental coverage. Check the box on page five if this is a work-related injury. Fill out the duplicate form if you have any secondary insurance, read and sign the privacy statement at the end, and then return it to me with your insurance card.”

Bartimaeus shook his head in shame, mumbling something under his breath.

“What did you say?” John demanded.

A gasp came from the disciples. “Uninsured?” they said looking at each other with disgust. And the crowd began to back away from Bartimaeus.

“Do you have cash?” John demanded.

“Do you have a credit card?”

“Do you even have a job?” John added in desperation.

“Well, then,” John snapped, “you’ll simply have to find another Messiah.”

Bartimaeus cried out even more loudly, “Son of David, have mercy on me!”

Jesus heard the man and stopped what he was doing and said, “Who is that? Call him here.”

And they called the blind man, saying to him, “Take heart; get up, you’ve been pre-qualified.”

Throwing off his cloak, Bartimaeus sprang up and came to Jesus. Then, Jesus said to him, “What do you want me to do for you?”

Jesus said to him, “Go. Your faith has made you well.” And as he left, Jesus turned to the disciples and said, “Under no circumstances is this man to be charged a co-pay.”

Two thousand years later, in this, our privileged nation, would Bartimaeus be able to get help? As a poor, blind beggar, I seriously doubt it. Especially given that 28 million people still do not have health care in this country, and 15–20 million will probably lose their coverage if the Affordable Care Act (ACA) is repealed.

No, I’m afraid Bartimaeus would be out of luck.

So, here we are in our privileged country, a place that owns 41.6% of all global wealth, where people are having to choose between food and medicine, and people are dying because they can’t afford treatments or surgery. The sad fact is that this is a country where people can get insurance for their pets more readily than human beings!

Houston, we have a problem.

The healthcare crisis in this country is not just some intellectual Rubik’s Cube for us to chew on. This is a political and ethical mandate.

Why political? Let’s remember the words of the Declaration of Independence: “We hold these truths to be self-evident, that all men are created equal, that they are endowed by their Creator with certain unalienable Rights, that among these are Life, Liberty and the pursuit of Happiness. –That to secure these rights, Governments are instituted, deriving their just powers from the consent of the governed . . .”

It’s a pretty simple argument. The right to life, liberty, and the pursuit of happiness clearly envisions and encompasses health and safety. And, according to the Declaration, governments have been instituted to secure those rights. Therefore, health and safety are a political mandate.

It is also set forth in the United Nations’ Universal Declaration of Human Rights: “Everyone has the right to a standard of living adequate for the health and well-being of himself and of his family, including food, clothing, housing and medical care . . .” (Article 25:1)

They are also an ethical mandate. Consider our religious teachings that command that we care for the poor, heal the sick, bear each other’s burden, and love our neighbor as our self. Perhaps the clearest of all the teachings is found in the Good Samaritan story in the Book of Luke. There, the Samaritan is the only one who will help a wounded man lying on the side of the road. He not only dresses the man’s wounds, but he pays for his health care. “He took out two denarii and gave them to the innkeeper and said, ‘Take care of him; and whatever more you spend, when I return I will repay you.’” (Luke 10:35) If that story is not clear enough, at the end of the telling, Jesus says to his disciples, “Go and do likewise.”

Go and do likewise? One of the greatest ironies of our modern era is that so many of our political leaders claim to be Christians, yet they ignore, even deny, the basic tenants of the religion. In fact, a first-term Congressman from Kansas was recently quoted as saying that the poor “don’t want health care and aren’t going to take care of themselves.”

Go and do likewise.

And we can. The Canadians did it. The UK did it. The Scandinavians did it. And guess what? The federal government has done it, too. The healthcare plan for federal employees is one of the broadest, most comprehensive health insurance programs available. Why not roll that out so that everyone might also enjoy it? As the late Senator Edward M. Kennedy of Massachusetts said, Americans should get “exactly what we [as Congress] have.”

The irony today is that Congress has been removed from the cushy federal plan and placed under the ACA. And if Congress repeals the ACA, they rejoin their fellow federal employees in their cushy federal plan. Makes you wonder about their personal motivations for repealing it.

It also makes you wonder if a group of monochromatic wealthy, privileged individuals who face no risk of losing their own personal coverage should be the ones deciding the fate of the rest of the country. I share the words of Carol Folt, Chancellor of the University of North Carolina and an internationally recognized researcher. “As a scientist, I’ve never seen an answer to a problem come from a group that all looked the same and thought the same.” Well amen to that.

Let me share a plan we should consider as a prototype. It covers everything: physical, mental, and spiritual healing. It is very affordable. In fact, it’s free. There’s not even a deductible or complicated forms.

It’s God’s healthcare plan. A plan you are given at birth and keep all your life, unless you yourself decide you don’t want it (and even then you’re still covered). There are no pre-existing conditions; it is come as you are no matter how wounded or broken. Most importantly, this plan is offered to everyone – from every walk of life. It’s the true universal healthcare plan we should be working towards.

So, I return where I started: Karl Barth was right. When we overlay a biblical, ethical perspective on modern-day problems, we begin to see each other as God sees us. Compassion and mercy become an integral part of the conversation. We remember our political and ethical mandates to care for each other and lift up the downtrodden.

The world is full of people like Bartimaeus, who through no fault of their own, are unable to access basic rights and services in this country. This is not an issue involving only statistics. This is an issue involving human beings. And the moment we remember that, is the moment when we begin to transcend the red tape, greed, political wrangling, and fear, and move slowly, but surely, to the true universal health care that all God’s children deserve.