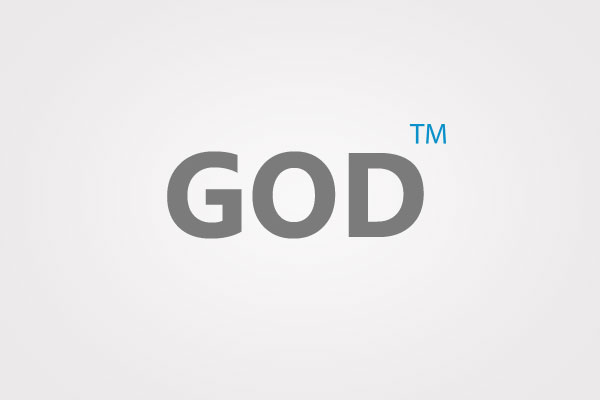 All rise. Hear ye, hear ye, hear ye. All persons having business before this honorable trademark court draw nigh, give your attention and you will be heard. Docket No. 1A-4-6 is now called regarding trademark violations of the name: “G-O-D.” Counsel for the plaintiff may approach. You may be seated.

May it please the Court: I represent the owner of the protected and trademarked name “G-O-D,” also known as Yahweh, Allah, Jesus, Brahma, the Great Spirit, etc. This suit was filed as a result of deliberate and unauthorized use of the aforesaid trademarked name of G-O-D (hereinafter referred to as “God”). In support of this complaint, we offer the following five examples of misuse.

It is almost impossible to turn on the TV these days without seeing a politician claiming to be called or blessed by my client or saying that God speaks to them about what tie to wear or bill to veto. Presidential candidate Donald Trump even had the audacity to indirectly claim endorsement by my client when he said, “I will be the greatest jobs president that God ever created.”

For the record, my client has not and will never endorse any candidate, or get involved in politics in any way. And while we’re talking about politics, let us add nationalism to the argument. It is hard to go more than five minutes in this country without hearing the phrase “God bless America.” Well, my client does bless America and South America and Iraq and Tunisia and Taiwan and Tasmania. And while we don’t mind you using this phrase, we want to ensure that it is not to the exclusion of everyone else. As the late Sen. William Fulbright from Arkansas warned nearly fifty years ago, “Power tends to confuse itself with virtue, and a great nation is peculiarly susceptible to the idea that its power is a sign of God’s favor.”

Unauthorized use of God’s name in marketing is rampant. “G-O-D” is used to sell everything from teeny bopper clothing to burgers. Forever 21 and In-N-Out Burger both utilize John 3:16 in their packaging. Then there is the 2015 Mophie Super Bowl commercial that showed the world crumbling under unimaginable disasters and ended with an image purporting to be my client in heaven saying, “gosh darn it” because his cell phone died. The ad is entitled “The All Powerless.”

My client has never given verbal or written permission to use his or her likeness, name, or brand in a marketing campaign. Ever. I submit to this Court the words of Dick Rogers, of the San Francisco Chronicle: “When God speaks, it is a good idea to listen. When someone else tells you God spoke, best double check.”

There are too many examples to share in this category. Let me highlight just a few. First, the prosperity gospel: the idea that God shows blessings through material wealth–i.e., pleasing God will get you Gucci.

This makes no rational sense. Just look at my client’s son–born into poverty. And what about the 21,000 people who die every day of hunger or hunger related causes? According to this argument, they apparently brought it on themselves by disappointing God.

But it’s not just the prosperity gospel–its general religious craziness. Like the television evangelist who recently told his viewers that God will erase their credit card debt if they will use their credit cards to donate to his ministry. My client never agreed to such an offer.

I remind the court of the words noted by Maureen Dowd in a New York Times article, “Dear God, save us from the people who believe in you.”

Thanking God from the winner’s circle has become so common that one British newspaper published a letter to the editor entitled: “Leave me out of your petty games–Love, God.”

What bothers my client the most about this category is that professional athletes only praise God when they win. They never thank God if they lose, as if the whole experience is meaningless unless you get a trophy.

Throughout history, humanity has invoked the name of “God” to justify every imaginable type of violence: rape, murder, the pillaging of land, slavery, genocide and war. Consider everything from the Thirty Years War to the Crusades to the Third Reich to Vietnam, Iraq and Afghanistan. War is not about God. War is not of God, for God stands not on one side or the other, but in the middle of the battlefield…in the midst of the suffering and in the midst of the pain. When the words stop and the bombs begin, notwithstanding any of our differences, we all weep in the same language…and God weeps with us.

It is a slippery slope for God’s name to be invoked for something like war because if God is seen as justifying war, then the next thing you know, God is being held responsible for famine, disease, suffering, evil, etc. Worst of all, people then begin to point to it as some type of divine judgment.

It is incomprehensible arrogance to think that human beings can know, predict, align with, or declare war on behalf of my client. Unauthorized use of my client’s name, G-O-D, placed on everything from touchdowns to war, must cease and desist.

In support, let me share four short examples from the extensive affidavit known as the Holy Bible, which was filed by my client.

Job 26:14
Behold, these are but the outskirts of his ways, and how small a whisper do we hear of him! But the thunder of his power who can understand?

Psalm 147:5
Great is our Lord, and abundant in power; his understanding is beyond measure.

Isaiah 40:28
Have you not known? Have you not heard? The LORD is the everlasting God, the Creator of the ends of the earth. He does not faint or grow weary; his understanding is unsearchable.

Our goal as human beings should not to be right, justified, revenged, or the victor. Our goal should be to ensure that all God’s children are lifted up, cared for, honored and safe. As Rev. Candace Chellew-Hodge wrote: “God blesses us–be we nation or individual–when we realize we are not living simply for ourselves or for our nation, but for God and each other.”

We do not know God’s thoughts or ways. We cannot utilize the name of “G-O-D” to advance our selfish purposes. Unauthorized use of my client’s name must stop. And as final evidence to this court, I leave you with the words of Abraham Lincoln: “My concern is not whether God is on our side. My greatest concern is to be on God’s side.”

Ladies and gentlemen…I rest my case.

This blog was also delivered as a sermon on October 11, 2015 at the historic Madison Avenue Baptist Church in New York City.