A Crack is Where the Light Gets In: A perspective on the 2016 election 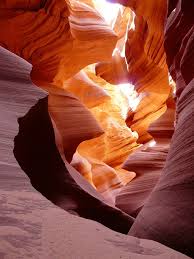 (This piece was delivered as a post-election sermon at the historic Madison Avenue Baptist Church in New York City on Nov. 13, 2016)

Recently, my husband and I were out in Arizona and Utah. We love that area of the country – red deserts, fantastical rock formations, and, of course, the canyons. Usually, when we think of a canyon, we think of something like the Grand Canyon where there is a gigantic hole in the earth. But there is another type of canyon that is my favorite, and those are called slot canyons.

What makes a slot canyon different is that the top of it is just a small crack – a slot – sometimes only a few feet wide. But hidden below that modest crack is a vast canyon carved over thousands of years by water and floods carrying sharp, abrasive sand, rocks, and debris in its torrents. It forms that way because the rock on the surface is harder than the soft sandstone underneath.

I couldn’t help but think of those canyons when we finally ended what seemed like seven lifetimes of an election cycle. That canyon represented exactly how I felt. The years of sharp, abrasive language, the torrent of accusations, the flood of racist, sexist, xenophobic debris had cracked my otherwise hard surface and begun to erode my core.

I know I’m not alone. This was an election like no other. When is the last time you can remember that the day after an election, the Canadian immigration site crashed?

There was such desperation in the air that the satirist, Andy Borowitz, crafted this headline for the New Yorker Magazine: “Queen offers to restore British rule over United States.”

The impact of the result was exponentially boosted because it felt personal. It certainly did to me as a woman with the sexist, abusive language thrown about like it was everyday dialogue. It clearly felt like that for people of color, for Muslims, for Mexicans, for all minorities as well. It was like no one cared, that no one heard us, that the hate-filled language we had endured for months – years even – didn’t matter, that we didn’t matter.

It’s a bad sensation to feel you don’t matter, to feel you’re not heard. It can produce a corrosive rage that can carve up your insides . . . like a slot canyon in the deserts of Arizona.

There’s another thing, though, about those slot canyons that makes them different from all others. And that is the light. Since the opening on the surface is so narrow, there is very little light that gets in. Everything looks dark, dank, and foreboding until . . . until the sun rises just high enough for a beam to pierce through the opening and the entire place lights up. You can finally see the canyon for what it truly is. Good and bad.

First you see the bad part: scorpions lurking in the shadows, a few lizards, and slithery snake trails in the sand. But you quickly move past those to the good. When the light breaks through, you see the wondrous diversity of colors and layers and strata; beauty that photographers and artists flock to see from all over the globe; things you don’t appreciate until the light breaks through the crack.

This election has cracked us as a people and as a nation. And like that slot canyon, cracks allow in the light. We see things we didn’t necessarily see before. Good and bad.

We see the scorpions, the slithery snakes, the haters, the underbelly of America that we have hoped and prayed never really existed. But the crack lets in the light and shows us they are there.

But there’s something else we see in that light. For through the cracks and brokenness, we also see straight through our core. We are reminded who we truly are as a nation and as a people.

I was reminded of that fact watching the New York City Veterans Day parade. Here we were, just a couple of days after a vicious election cycle that literally tore our country apart, and yet up and down 5th Avenue were waves of soldiers – fellow Americans – people from every race, gender, ethnicity, language, and religion marching in solidarity, commitment, and sacrifice for this nation.

America didn’t stop being America this week because of the politicians and the pundits. These messages of separation and hate are not what this country was built on. It was built on the ideals of freedom and opportunity; it was built on life, liberty, and the pursuit of happiness. That never left. And when we look through the cracks and brokenness, we are reminded that it is still at our core.

We are also reminded that at our core we are Christians, which means we fight for justice and equality, shining the light of hope and truth into every crack in the rock of bigotry and hatred we can find. It also means we follow the greatest commandment of all: love thy neighbor.

Of course, Jesus didn’t qualify that commandment along party lines. Everyone (Democrat, Republican, Independent, etc.) is our neighbor. Tragically, an aftermath from this election was a sense that we as Americans aren’t neighbors anymore. Many have said, “We don’t even know our fellow Americans.” Polarized by the media and the politicians into a mentality of us versus them, trampled by the racist, sexist, and bigoted language, it is easy to believe that all those who do not see the election as we do are haters.

Yes, there are racists and misogynists and scorpions in this country. They exist and they are vocal and many are powerful. They were part of this vote. Too much of it, in fact. But in my deepest heart, I don’t believe hate is what drives the majority of Americans. I can’t – for to believe that is to give up all hope.

Frank Bruni, columnist for the New York Times, explained it this way: “Donald Trump’s victory . . . does not mean that a majority of Americans are irredeemable bigots (though too many indeed are). Plenty of Trump voters chose him, reluctantly, to be an agent of disruption, which they craved keenly enough to overlook the rest of him.”

We may abhor that willingness to overlook, we may not agree with the vote, but when the light breaks through the cracks, we start to see that we aren’t the only ones who feel rage. We start to see, perhaps, that many cast their votes out of a familiar place: the personal pain and anger from feeling unheard and unimportant – not hatred of the other. And in order to rebuild, we have to start with what we have in common. As the book of Ephesians tells us, “let all of us speak the truth to our neighbors, for we are members of one another.” (Ephesians 4:25)

When we look through the cracks and brokenness to our core, we are reminded that we are Americans, that we are Christians, and that we are also Baptist. We are a people whose forbears came together in response to intolerance. Manifestations of that ideal include supporting separation of church and state, advocating for worship free from discrimination, and lifting up respectful dialog as a healthy means to understanding.

One of the most important ideals of the Baptist is soul freedom: the idea that humankind was created by God to be free, to make decisions on their own – even if the decisions turn out to be wrong. This means we can disagree as individuals, but we stay together as family and as a people.

Brothers and sisters, we have two choices going forward: we can allow the corrosive anger to take us down, or we can use it to rebuild a new world. The book of Ephesians also tells us “to be angry, but do not sin” (Ephesians 4:26). Instead of giving up, I say we gear up and use our anger for good.

We have come through a battle, and we are cracked to our core. But while painful, a crack is also how the light gets in.

Let the light remind us of who we are.

Let the light remind us of what we have to do.

And let the light remind us of our most treasured gift: the wondrous diversity of colors and layers and strata of this great nation, beauty we can too easily forget when the sun goes down.

Ring the bells that still can ring

There is a crack, a crack in everything

That’s how the light gets in.