The Eclipse of All Things Good 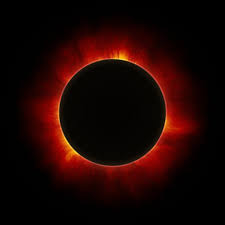 This blog was featured by Huffington Post  and given as a sermon on August 20, 2017 at the historic Madison Avenue Baptist Church in New York City.

Unless you have been living under a gigantic boulder for the past month, you know that tomorrow there will be a total eclipse of the sun. And, it’s going to be quite a party . . .

The 7–Eleven is selling eclipse glasses. There are solar eclipse t-shirts and solar eclipse apps. My favorite are the numerous articles about how to throw an eclipse party, complete with eclipse arts and crafts and suggested food, like blackout cake, crescent cookies, or dishes with sun-dried ingredients. For us in 2017, the eclipse will be a huge party. For the ancients, however, it meant panic.

In the days before people understood the orbits of the sun and the moon, they had no idea what caused an eclipse. In fact, many cultures had myths about evil characters trying to devour the sun. The Vikings believed wolves ate it, the Chinese thought a dragon ate it, the Vietnamese a frog, and the Romans a demon. Whatever it was, the ancients believed an eclipse was a bad omen, a sign of destruction to come, an eclipse of all things good.

We also see it in the Bible. The prophet Joel, for example, warned that because the people were turning from God, a day of darkness and gloom would come, where “the sun and the moon are darkened, and the stars withdraw their shining” (Joel 2:10).

However, there’s a slight difference. In this passage, the prophet Joel is talking about an eclipse of the sun not by the moon, but by locusts; locusts that come in huge swarms blackening the skies, destroying and consuming everything in their path – all food sources, all nourishment, all things good (Joel 2:25).

Twenty-five hundred years later, we face yet another eclipse of all things good. Here in 2017 America, the light is being eclipsed by our own plague of locusts — the KKK, the neo-Nazis, and the white nationalists we saw in Charlottesville – locusts coming in swarms, blackening the skies, and destroying everything in their path, destroying all things good.

Charlottesville, Virginia is only one example. This plague has been going on for years and is now growing in strength. This weekend alone there were nine different alt-right rallies planned across the country in Atlanta, Austin, Boston, Los Angeles, Mountain View, CA, New York, Pittsburgh, Seattle, and Washington, DC.

And here’s the scariest part — these hate-based groups are being led by young people. The pastor, author, and theologian Brian McLaren was in Charlottesville and reported that the white nationalists were young, the majority in their twenties and thirties, carrying torches and chanting phrases, such as: “White lives matter!” and “Jews will not replace us!”

He went on to note how young, white poeple are being radicalized in America today to the point of using the ISIS tactic of killing people with vehicles — like the one that killed Heather Heyer in Charlottesville. He said, “Radicalization isn’t simply something that happens in the Middle East — it is happening today, in Ohio and Kentucky and Florida and Virigina.”

Have no doubt, we are facing an eclipse of epic proportions — one that will devour all the light and steal from us all things good, including our young people and our future.

So what do we do? We, again, take a lesson from our ancient ones. In the era when people thought a wolf was eating the sun, they also believed that the creature could be driven off by creating as much loud noise as possible: yelling, ringing bells, or banging pots and pans. The book of Joel starts out with similar language (2:1): “Blow the trumpet in Zion; sound the alarm on my holy mountain!”

The only way to fight the evil that is blotting out our light is to blow the trumpet and sound the alarm. To speak out and often.

Let me give you two examples. First, what happens when we don’t speak out. This week, our President, when criticizing the riots in Charlottesville offered a vague, watered-down response, saying the violence “came from many sides.” After a national backlash, he then condemned the white nationalist. Within days, he defended them again, saying “there were some very fine people in their midst.”

That failure to “sound the trumpet” prompted David Duke, former imperial wizard of the Klan, to tweet this: “Thank you President Trump for your honesty & courage to tell the truth about #Charlottesville & condemn the leftist terrorists in BLM/Antifa.”

Let’s be clear: the KKK tweeted a thank you note to the President of the United States.

This is the ultimate eclipse of all things good.

And its’ not just the President. It’s white Christians who have been woefully silent. This week, a headline in the Washington Post read: “After Charlottesville, will white pastors finally take racism seriously?” It quoted Dr. King’s letter from Birmingham jail, “[they] have remained silent behind the anesthetizing security of stained-glass windows.” Whether pastor or parishioner, whether Hindu, Muslim, Buddhist, Christan, Atheist, or just trying-to-figure-it-out, we cannot remain silent. Dr. King warned us, “In the end, we will remember not the words of our enemies, but the silence of our friends.”

Let me now give you an opposite example; an example of someone who is speaking out. Rev. Rob W. Lee, IV is a decedent of General Robert E. Lee who led the Confederacy during the Civil War. Rev. Lee is a minister in North Carolina, an outspoken anti-racist, and a fighter of the white nationalists. In fact, he is fighting for the statue of his relative, General Robert E. Lee, to be taken down.

As a Southerner myself – a Southerner with numerous relatives who fought for the Confederacy – I was deeply moved by his words and actions. And despite death threats and threats to his church, Rev. Lee continues to speak out.

“God has commanded us to speak up to small and big acts of oppression. So that may mean condemning the racist joke or standing up for the woman who needs a raise because they make 70 cents on the dollar compared to men . . . or that black lives matter to God. When you ignore the fact that white matters more than black you are being silent to a population of God’s children . . . Until we get off our thrones and into the streets to proclaim and re-claim what racism has taken away, we’ve missed the point of Christ’s death and resurrection.”

We have to blow the trumpet in Zion. We must sound the alarm on God’s holy mountain. We have to – – if for no other reason than for our children. How can we face them if we don’t? How can we hand them a world eclipsed by hatred and evil? We can’t. We must fight and then tell them of our fight.

And when we do, God offers us a promise:

Brothers and sisters, we have to be the dreamers.

We have to be the ones to blow the trumpet and call out the evil.

We have to be the ones to sound the alarm against hatred, racism and judgment.

We have to be the ones to hold on to that dream where all God’s children are treated with respect and dignity and love.

This is a dream that was there before the eclipse of all things good.

And it will be there, shining out, when the shadow moves on.

For then, we will know