If You Don’t Roar, What’s the Point? 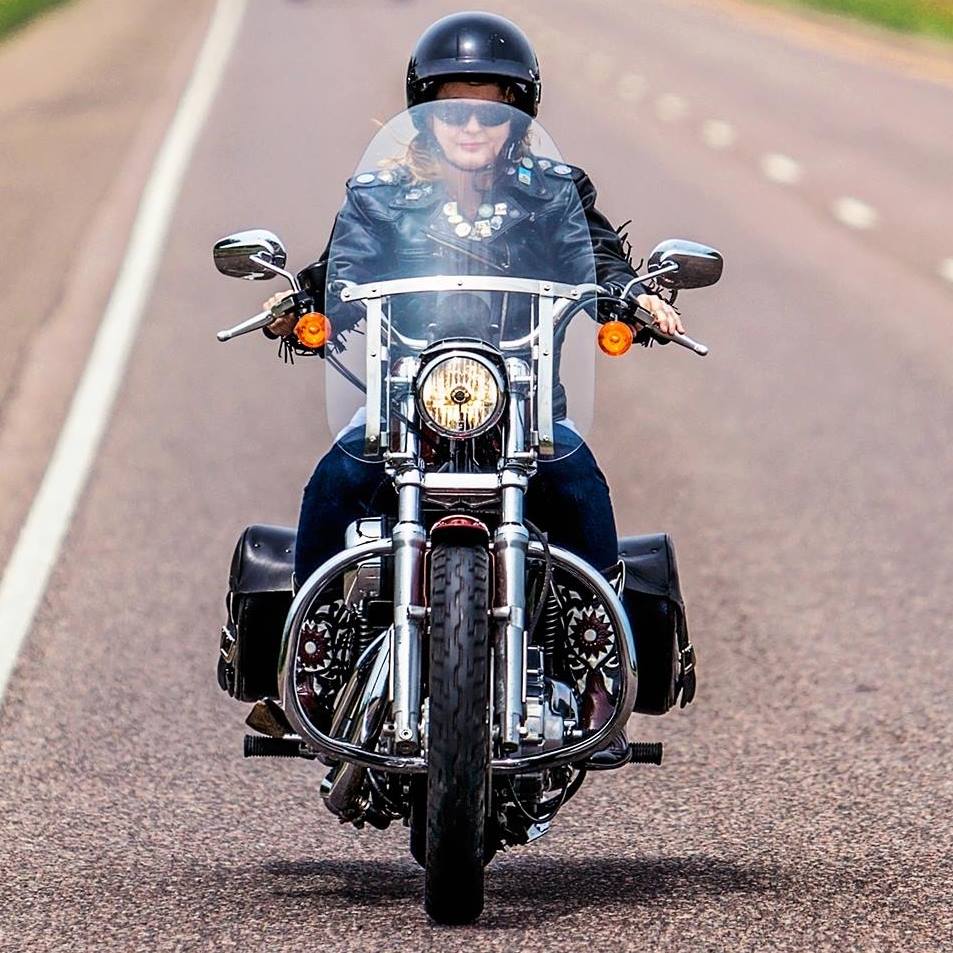 Before I start, I want to offer an apology to all non-Harley motorcycle riders who may be offended by this message.    God loves you. And I try.

Many years ago, before I bought my first bike, my husband Toby took me to a biker rally in Connecticut (an oxymoron if there ever was one). Like most rallies, the bikes were parked in rows with admirers walking up and down, comparing motorcycles and sharing stories.

Of all the gathered horsepower, for me, one bike stood out. It was hard to miss: red flames on a jet-black gas tank, fringed ape-hanger handlebars that you had to reach high above your head to hold, pipes that looked like two huge corn silos laid sideways, and a sticker on the back bumper that read: “Vietnam: We were winning when I left.”

Standing by the bike was the owner (again, who was hard to miss). Straight out of Road Warrior, he donned dirt encrusted black leather chaps, a leather vest (worn shirtless – and shouldn’t have been), and a giant tattoo on his left arm that was something akin to the naked woman silhouette on a tractor-trailer mud flap.

As we watched, he took the last inhale off his cigarette, ground it under his harness boot and swung his leg over the bike preparing to crank up and leave.

“This should be good,” I said to Toby, pointing at the pipes.

“Don’t count on it,” he replied, rolling his eyes.

The road warrior pulled the bike up off the kickstand, straightened the front wheel, pushed the kill switch to run, then turned to the gathered crowd with a Jack Nicholson type grin, and pressed the start button.

The sound that came out made me gasp. It was like a grasshopper in puberty – breathy, high pitched, even a bit annoying.

“What is that?” I exclaimed. “How could something that big and bad sound so wimpy?”

Toby laughed. “It’s a Honda. That’s how they sound.”

“But what about all the badass leather stuff?”

“Hype,” he said, shaking his head.

I stood there in shock for a few more moments until another sound exploded out over the grasshopper noise. It was a sound that combined the threatening rumble of an approaching thunderstorm with the subtle “potato-potato-potato” rhythm chugged out by the exhaust stacks of my Uncle’s 1960 John Deere. I turned, and there behind us, gleaming in the sun, was a giant Harley Davidson.

“Yup, I figured you would,” Toby nodded. Then he added the words that have stuck with me until this day: “Hey if it don’t roar, what’s the point?”  (I’ve been a Harley rider ever since.)

If it don’t roar, what’s the point?

Amen to that. It’s true for motorcycles and it’s true for us. We can live life with a whimper or we can live it with a roar. We’re going to be riding down life’s road either way. Why choose anything but living life loud and proud.

This is especially good advice now given our headlines. So many people are offering a voice that sounds more like a grasshopper, than a roar — veiled concerns, passive good wishes, the ubiquitous “thoughts and prayers.” But if you don’t back these passive words up with action – with a roar – it’s only hype.

And a roar is exactly what it’s going to take. We are facing gun violence, racism, mass murders, sexual attacks, natural disasters, and rampant terrorism. We have to do something. As the book of James says, “What good is it if someone says he has faith but does not have works?” (James 2:14).

Don’t get me wrong, I believe in the power of prayer. But prayer alone is not enough. As God told the Apostle Paul, “Do not be afraid, but speak and do not be silent” (Acts 18:9). Maybe this means calling your government officials, or speaking out against gun violence, or offering a kind word to guests at a food bank or manning the phones at a battered women’s shelter.

Whatever it is, we must take a stand. We must speak out. We must not live our lives with a whimper. Because in the end, if we don’t roar, what’s the point?